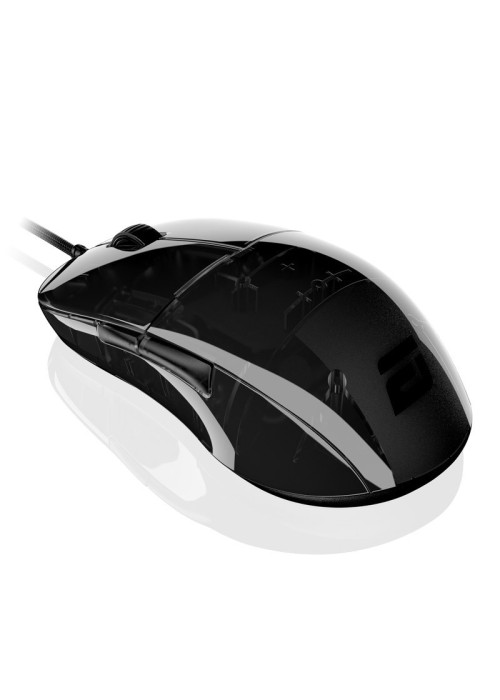 The XM1r is a refresh of the popular XM1 series of gaming mice and the latest innovation from Endgame Gear. The XM1r offers user-requested features and improvements and is engineered for maximum performance to ensure an utmost accurate and responsive gaming experience.

The Dark Reflex variant has a dark semi-transparent shell and a glossy finish.

THE ENDGAME GEAR XM1R AT A GLANCE:

The highlight of this refresh is undoubtedly the XM1r’s responsiveness. It utilises the latest Pixart PAW3370 sensor, with the XM1r being one of the first gaming mice to use it. The sensor is fine-tuned for maximum performance, which means users can expect low input lag, no smoothing and no power-saving states.

Additional specifications, which will appeal to esports professionals, include a tracking speed of 400 IPS, polling rates of 125, 500 and 1000 Hz (1000Hz by default) and a lift off distance of 1mm (2mm via software).

The team at Endgame Gear have not only updated the optical sensor but added improved switches to the XM1r. This update uses Kailh GM 8.0 in the right and left buttons. Standard Kailh GM 8.0 switches have an actuation force of 65+-10gf, with the range being 55-75gf. The custom-sorted GM8.0 in the XM1r have a super narrow operating force range of 55-60gf, which results in a pleasant, light and crucially accurate click.

Meanwhile, the side button TTC micro switches have been updated for a crisper and more consistent click feel as well as added durability.

The XM1r retains the popular tactile Japanese ALPS wheel encoder being used in the original XM1 from day one. This gives the wheel scroll steps a distinctive yet accurate feeling.

The XM1r still utilizes an STM32 ARM microcontroller and features its patented analogue technology which enables click response times of below 1ms superior to traditional digital approaches which for mechanical switches are usually in the range of 2ms to 10ms.

The XM1r is available in two new colours in addition to the classic black and white. This Dark Reflex option has a dark semi-transparent shell and glossy finish. The result is an eye-catching aesthetic with the circuit board inside the XM1r visible.

Other design enhancements include an adjustment to the Endgame Gear logo, which now appears as a solid colour to complement the Dark Reflex’s finish.

Endgame Gear has retained the established XM1 shape so the XM1r is perfect for claw grips. However they have updated the flex cord for improved durability while retaining its flexibility - in fact, it almost feels like using a wireless mouse.

Additionally, Endgame Gear has responded to feedback and now include both large and small skates with the XM1r. While the small skates are fitted by default, by way of a well-engineered hybrid design it is possible to easily install the large skates. This gives users yet further customisation options when it comes to how smooth the mouse scrolls and ensures you don’t have to risk buying low-quality third party options.

A highlight of the XM1r will surely be its new redesigned software, which allows for more personalisation of settings than the previous version. From bindable scroll as well as assignable multimedia keys. Additionally, individual x/y CPI settings can be adjusted instead of users only being able to change single values. Ripple control and sensor angle snapping have been included. Plus the software can be set to auto-update both itself and the firmware.